Apple today announced that teachers using the iTunes U will be able to create, edit and manage entire courses directly from the iPad, while students will be able to start class discussions and ask questions using their tablet. The tools will be part of a future update scheduled for July 8. 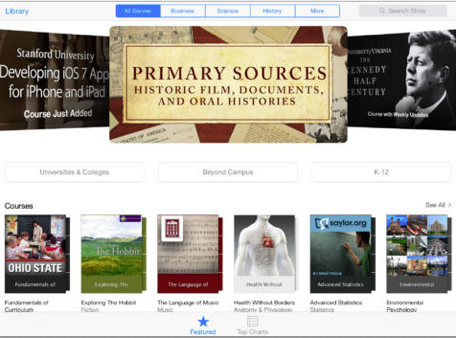 “Education is at the core of Apple’s DNA and iTunes U is an incredibly valuable resource for teachers and students,” said Eddy Cue, Apple’s senior vice president of Internet Software and Services. “iTunes U features an amazing selection of academic materials for everyone around the world. Now, with the ability to better manage and discuss educational content, learning becomes even more personalized on iPad.”

The new updates to iTunes U will give educators the ability to add content directly from the iPad’s built-in camera, iWork, iBooks Author or any of the more than 75,000 educational apps available for iPad.

“iTunes U is the most powerful destination for bringing the entire educational experience to life on iPad,” said Fraser Speirs, head of computing and IT at Cedars School of Excellence in Scotland. “By freeing teachers to create and organize courses right on iPad, educators can be better focused on enabling student participation both with the content and one another.”

The update will also bring a Discussion tab, which means students using iTunes U on the iPad will be able to automatically follow classroom discussions and join conversations on new topics or set up push notifications for when new topics are started or replies are added to active discussions.