If you’re in the market for an iPad but are not looking for the latest, Apple has restocked third generation Wi-Fi iPads in both 16GB and 64GB capacities online in white. Earlier in July, we saw 16GB Wi-Fi models in black hit the refurb store.

The 16GB model is $379 while the 64GB model is $549. All refurbished iPads come with new exterior shells and batteries, and tested, so they are literally brand new except there is no shiny packaging. 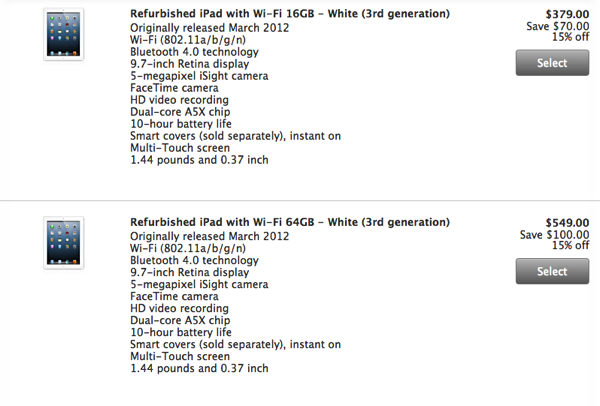 Compared to the latest fourth generation iPad (which at new is $120 more), which has the slightly faster A6X processor, a 1.2MP FaceTime camera and Lightning connector, the differences aren’t all that substantial for casual users.

With Apple expected to launch new iPads this fall, you could also consider holding off to wait for fourth generation units to hit the refurbished store, but that might take a while. If you’re looking for a worthy iPad right now these just might do the job. Let us know if you’re going to jump on any of these models–stocks usually sell out fast.