As reported by Cult Of Mac, a Twitter user spotted the iPad Pro’s Smart Connector can update firmware of accessories. The user received a prompt to install an update for Logitech’s Create iPad Pro keyboard after installing iOS 9.3 beta 2. The update reportedly fixes the keyboard lag experienced by some users. 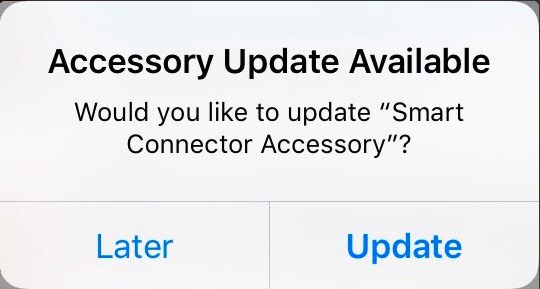 The source adds that iOS beta pushed the firmware update to the Logitech Create though the iPad Pro’s Smart Connector. Here’s what the German iPad Pro user Stefan Wolfrum, who discovered the feature, wrote in a Logitech support forum thread:

“Apparently, iOS 9.3 beta 2 is able to update the firmware of a Smart Connector keyboard — and actually did this with the Logitech Create keyboard I’ve currently connected to my iPad Pro! Now THAT’s something new!”

iOS 9.3 beta 2 users whose accessories require firmware updates are prompted with a simple question: “Would you like to update ‘Smart Connector Accessory?’”

Once a user accepts the new firmware update request, they are provided with updates as to how far along the flashing process is, with the whole thing completing before control of the device is handed back over.

Have you seen a similar prompt with your Logitech Create Keyboard?