The Toronto Star’s iPad daily newspaper, Star Touch, surpassed 100,000 downloads back in late December. In an interview with The Globe and Mail, John Cruickshank, the Star’s publisher, said the app is now “closing in on 200,000 downloads very quickly.” 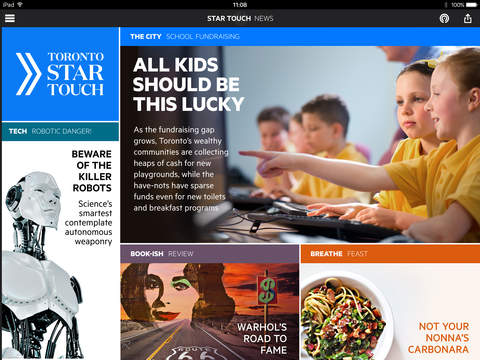 However, not all is good with the news publication, as it has announced its printing plant in Vaughan will close, with existing printing to be contracted out to Transcontinental Inc. instead. This means 220 full-time and 65 part-time jobs at the plant will be cut.

As for Star Touch, 10 short-term contract staff are going to be let go—the same people who were hired to launch the digital newspaper. Cruickshank explained when they hired 70 new staff to help launch Star Touch, “we always understood that that might not be the right number.”

The Toronto Star is investing $14 million into Star Touch, which is based on the same platform as Quebec’s successful La Presse for iPad. Star Touch editor Michael Cooke told told the “Roger & Marilyn” show back in October the app is “doing for news what Cirque du Soleil has done for circus.”