Late last night JailbreakMe 3.0 went live around the globe, allowing all iOS devices on iOS 4.3.3 to be jailbroken. The method to jailbreak your device relies on a malware exploit via an infected PDF. This gaping security hole does not have an unofficial fix from Apple yet (it will come in the next firmware update), but @comex has released one for everyone in Cydia.

Here’s how to patch this exploit:

1. Launch Cydia. Search for ‘PDF Patcher 2’ and install it. Once it’s installed, no new icons will be added to your homescreen or options available. It’s a patch that just needs to be installed.

I suggest everyone with a jailbroken device via JailbreakMe.com to install this right away. 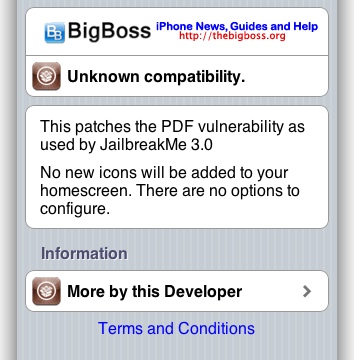