A couple of weeks back, Corona 1.0.5 update was released in Cydia to solve the iBooks crash upon launch issue which majority of users were reporting after applying the untether patch for iOS 5.0.1 on their jailbroken A4 devices. However, the issue was never fully resolved with users reporting randomly disappearing text and images from their installed iBooks especially the ones containing DRM protected content. Good news is, hacker @PlanetBeing has finally found a fix for this and is going to release it as Corona 1.0.6 update pretty soon as announced by @pod2g on Twitter a few hours ago.

“Hi, I heard some great news from IRC. @planetbeing has fixed Corona issues with iBooks DRMd books. Corona 1.0.6 to be released soon” 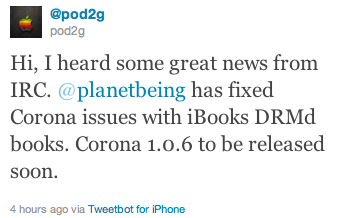 We don’t have an ETA for the release yet but Corona 1.0.6 should be available for download on Cydia pretty soon. We’ll keep you posted with all the updates so stay tuned!