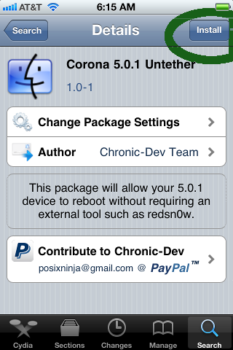 The original release of Corona 1.0-1

Running into the iBooks error with your untethered iOS 5.0.1 jailbreak on your A4 device? Try the iBooksFix2 patch solution; if that hasn’t worked, then you’ll be happy to know a real fix has been released via an update to Corona in Cydia.

Version 1.0.4 of Corona was released earlier (saurik has now released 1.0-5) to also fix ‘the launchd socket’ issue too, as noted by @pod2g on his blog:

Thanks to @xvolks for the development and @iH8sn0w for the testing.

If you used redsn0w to jailbreak, just install Corona via Cydia, as noted by @saurik–it will force a reboot afterwards:

Corona (5.0.1 untether) 1.0-4 is now out: users of redsn0w or the older packages should install. This fixes both iBooks and launchd (again).

Let us know how this updated version of Corona works for you!

Update 1: redsn0w 0.9.10b4 has been released that includes the latest iBooks fix.