Corona iOS 5 untethered jailbreak from Chronic Dev Team has received a series of updates in the past 24 hours, the latest being Corona 1.0-8 which reportedly fixes all the major issues reported by numerous jailbreakers. @Saurik (Jay Freeman) has been tweeting about the updates as well and has strongly suggested that all users jailbroken on iOS 5.0.1, no matter what tool they have used to jailbreak their devices, must install the latest Corona update. He also acknowledged all the hard work @planetbeing put into solving iBooks image loading bugs. 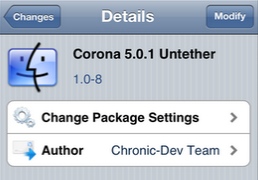 Here are the tweets:

@Saurik: “Corona 1.0-6: @planetbeing put a lot of work into solving iBooks image loading bugs. All users (however jailbroken) on 5.0.1 should install.”

For instructions on how to install Corona on your device, head over to this link.