Yesterday, we learnt that the domain “jailbreakme.com” which hosted JailbreakMe 3.0 exploit for iOS 4.3.3 jailbreak on iPad 2 and other devices, has been sold by its owner. We also told you that since the new owner is an unknown person, it was not safe to visit jailbreakme.com anymore. But just moments ago, Jay Freeman aka @Saurik, the creator of Cydia has tweeted that he has recently talked with the new owner who is “actually very likable and awesome”. He further added that “jailbreakme.com” has now been transferred to him so we no longer need to worry about shifting to a new domain.

Here are the tweets:

“Yesterday, we learned that jailbreakme.com was sold in July; today, I talked with the new owner: he is actually very likable and awesome. ;P”

…and tonight, jailbreakme.com was transferred to me (convenient, as I host the site ;P); so, going forward, we no longer “need to worry! :D” 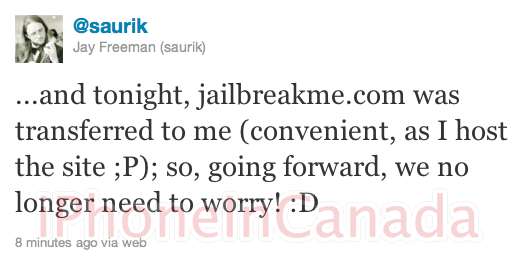 So folks, no need to panic as jailbreakme.com is now in the safest of hands out there.. well at least the safest in iOS jailbreak community 😉