Last week we were raving about a great new concept from designer Anton Kudin. He posted some images of a new way to unlock your iDevice, by folding the lockscreen, like an accordion, revealing your home screen. This “fold to unlock” tweak is no longer just a concept. 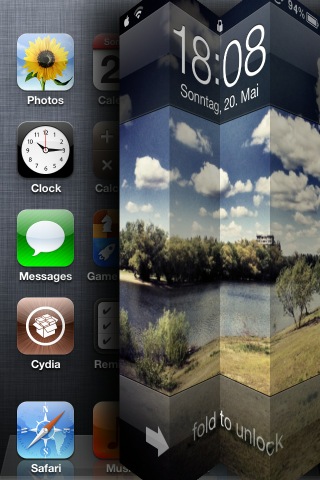 An iOS developer/hacker, by the name of Jonas Gessner (creator of ProTube), has brought to life the concept of Kudin, and expects to release it in Cydia soon. The new tweak will be called “Unfold”. There are few details known about the tweak, but it will perform just as we expected, and really folds the lock screen, as you perform the slide to unlock gesture. There will be no settings to configure for this tweak, and it will be fully compatible with native iOS lockscreen security.

It is not known how this tweak will work with notifications, or lockscreen tweaks like LockInfo, but we’ll have a full report and review, once it is released. Unfold will be compatible with iPhone, iPod Touch, and iPad, and will be a free tweak, available in the Big Boss repo. There is no solid release date, as the tweak is still under development, but it should be coming soon.

UPDATE: Jonas Gessner (aka @_Maxner_) just posted a few more detials on Twitter. Unfold will treat notifications and the Camera Grabber, as usual. Unfold will also be compatible with the lockscreen tweaks IntelliScreenX and LockInfo.