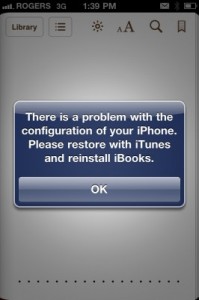 Are you suffering from the iBooks error in the latest iOS 5.0.1 untethered jailbreak (A4 devices)? If you haven’t tried the iBooksFix2 solution, pod2g has just sent out an update and notes the fix will be coming in an update of Corona via Cydia:

@xvolks worked to include @comex sandbox patches into the Corona GIT.

Expect a Corona update soon in Cydia that’ll fix iBooks and other softwares having sandbox issues.

I’ll update the blog when this is released.

@xvolks is based in France and previously released the iBooks fix, xBooks. @xvolks details his work with @pod2g in solving the whole iBooks crash problem via his blog:

With the invaluable help of @pod2g, I’ve patched the kernel in corona to make iBooks work without the ugly tweak called xBooks. Still no ETA.

I’ve developed this patch on my iPhone 4.
It needs to be adjusted to the other devices and being tested.
Since I do not own an iPad nor an iPod, I cannot do that myself. Hopefully, MuscleNerd will do the rest of the job and will release the package soon.

For xBooks users:
When this fix will be released, the xBooks fix will be obsolete and you’ll need to remove it and reinstall iBooks.

There’s no ETA on the iBooks fix release, but the news that a solution has been found is fantastic for many users suffering from the problem.