Apple seeded iOS 5 beta 7 to the developers yesterday and it didn’t take our Canadian homeboy iH8sn0w much long to update his Windows exclusive jailbreak tool. Sn0wbreeze 2.8b7 has just been released and is now available for download with full support for tethered iOS 5 beta 7 jailbreak on iPhone 4, iPhone 3GS, iPad, iPod touch 3G and iPod touch 4G.

Like previous couple of releases, Sn0wbreeze 2.8b7 also allows device hacktivation and bypasses UDID check which means any supported device can be updated and jailbroken on iOS 5 beta 7 without developer registration. Like always, your current baseband will be preserved for Ultrasn0w unlock support. 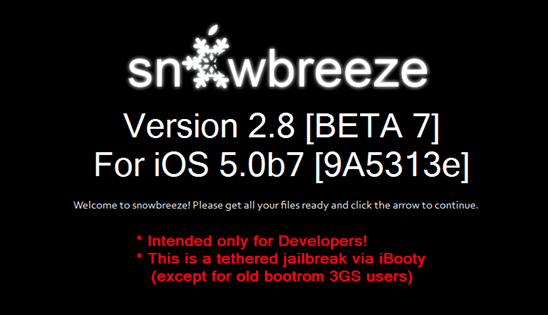 Below is the official change log of Sn0wbreeze 2.8b7:

iPad 2 is once again not supported.