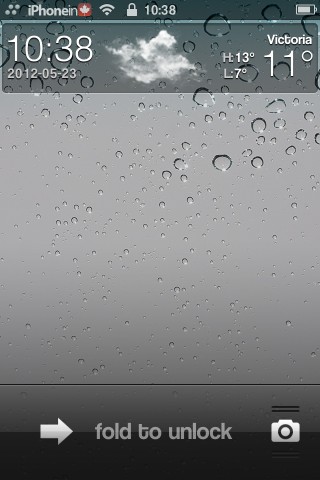 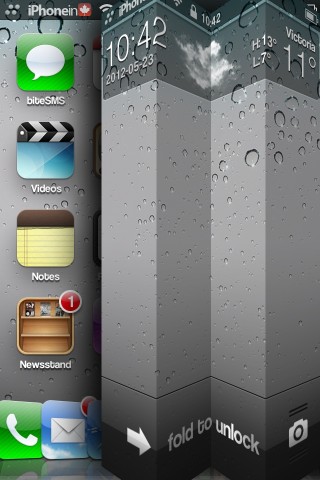 This tweak has had a quick evolution from concept to release. It wasn’t long ago that we were talking about this cool new concept from designer Anton Kudin. Then we heard that iOS developer, Jonas Gessner, was working on bringing the concept to life. Today, the new tweak has been released in Cydia, and it looks great.

Unfold makes your lock screen fold up as you slide to unlock. It is the realization of Anton Kudin’s “fold to unlock” concept. Unfold animates smoothly as you fold the lock screen and reveal the home screen behind it.

Its fully compatible with Intelliscreen X, LockInfo, Camera Grabber, Bulletin and many more lock screen tweaks. Notifications are handled like normally. Passcode users have no security loss, as the lock screen reveals the “Enter passcode” screen if a passcode it set.

I am using this tweak in iOS 5.0.1, on an iPhone 4S, with few issues. It works fine with the lockscreen tweaks “LockInfo” and “Camera Grabber for iOS 5”. The animation is nice and smooth, and I have had no stutter or slowing of the system animations. I have only noticed one little glitch, so far. Occasionally, when folding the lockscreen over, it only reveals a black screen, until you fold the lockscreen all the way to the right.

Unfold requires iOS 5.o or higher, and is only compatible with iPhone and iPod Touch. You can get Unfold in Cydia, under the Big Boss repo now, for free.