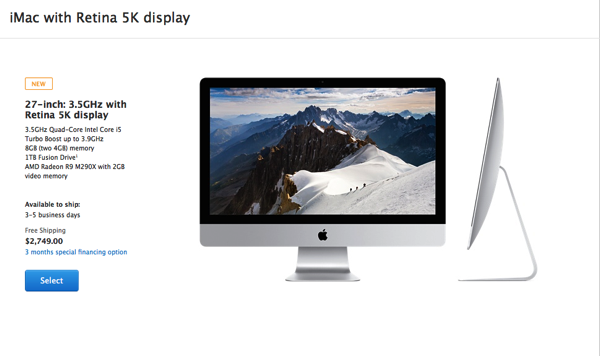 It’s the 30th birthday of the Mac this year, and Apple has prepared a new iMac to celebrate the occasion: the new 27-inch iMac with Retina 5K display. The new Mac computer is part of the continued march of Retina technology.

As Phil Schiller put it on stage, there has “never been a desktop display like this.” It features a 5120×2880 display packing 14.7 million pixels, making it the world’s highest-resolution display, a 5K display.

“Thirty years after the first Mac changed the world, the new iMac with Retina 5K display running OS X Yosemite is the most insanely great Mac we have ever made,” said Philip Schiller, Apple’s senior vice president of Worldwide Marketing. “With a breathtaking 14.7 million pixel display, faster CPU and graphics, Fusion Drive, and Thunderbolt 2, it’s the most beautiful and powerful iMac ever.”

The display of the Retina iMac uses a TFT-based panel and highly efficient LEDs and organic passivation to improve image quality, which will also reduce power consumption by 30%.

Of course, the new iMac comes with Yosemite. In terms of pricing, you can have it for a starting price of $2,749 (CAD), and it is shipping in 3-5 business days.