Apple Said to Be Preparing Faster iMac Launch for Next Week 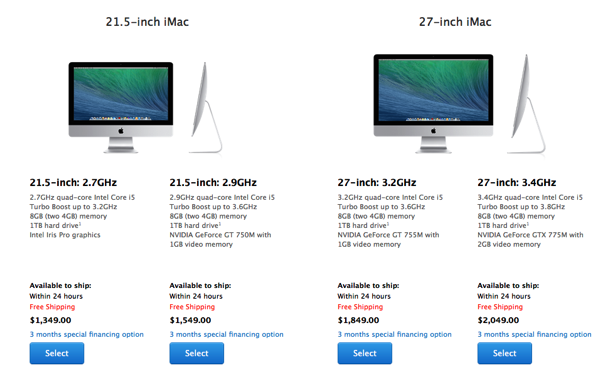 The same source who whispered about the previous MacBook Air refresh to the French site MacGeneration now says Apple will update its iMac line with faster processors, and make them more affordable.

The report also states that the new iMac models may include two Thunderbolt ports, and the official announcement will come later this week. However, the updated text refers to a postponed release: The new date now appears to be June 18.

The rumour apparently corroborates analyst Ming-Chi Kuo’s April predictions about an “economic” iMac in addition to other updates.

You may recall that the French blog’s source was correct in predicting the MacBook Air refresh earlier in April. It appears that Apple will apply the same 100 MHz increase in processor speed to each standard configuration, just as it did with the MacBook Air.

The beta version of the next-generation Mac OS X is already in the hands of developers, and evidence has been found of an iMac with Retina display. Rumours of a Retina iMac have been around since the launch of the Retina MacBook Pro, and by launching such a high-end model, Apple would split the Mac lineup and have two price points for the same computer.

According to Bloomberg’s Mark Gurman, he believes Apple may not hold an October event to announce Mac and iPad Pro updates with M2 chips. The M2 chips were unveiled at WWDC this summer. Does Apple have enough new features still hiding to justify holding an October event with the media? “It seems unlikely,” says Gurman. […]
Gary Ng
22 hours ago