Apple is working on iMacs with Retina display, suggests the evidence found in Mac OS X 10.10 Yosemite by French blog MacBidouille (via MacRumors). What the French bloggers discovered comes to corroborate the references found in OS X 10.9.4 beta last week.

The developer preview of Yosemite contains a file entitled “DisplayProductID-AE03,” a reference to a yet unreleased iMac, and what’s more interesting the range of supported resolutions, which includes Retina resolution as well. 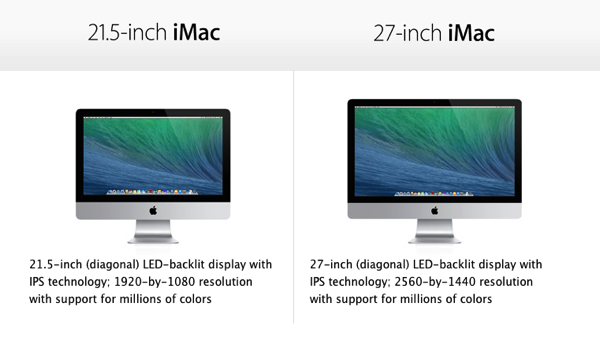 With this alone, it is not possible to guess the native resolution of the machine. This is a resolution that does not appear in the file, since it is native and does not have to be “scaled”.
Knowing that there is a gap between the values ??of 5760 and 4096, one can imagine something between these two (probably 5120×2880, 2560×1440 or in HiDPI), but this is speculation.

Rumours of iMacs with Retina display have been around since the Retina Display MacBook Pro was announced. Apple, however, was likely faced by a number of challenges before being able to bring the Retina display to the desktop. Now it seems like the time has come to take this step, so we can expect a Retina iMac this year, it seems.