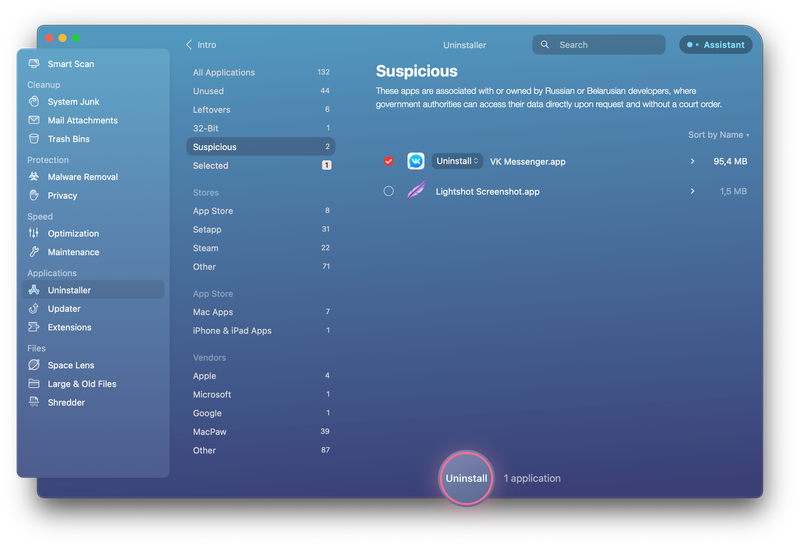 MacPaw, the makers of CleanMyMac X,  announced this week a new ‘Suspicious’ category in the program’s Uninstaller module for apps that are found to be associated with or owned by Russian or Belarusian developers, and as such may endanger users’ Macs and the privacy of their data.

CleanMyMac’s Uninstaller module is a one-stop solution to completely removing apps on macOS. The module separates apps into categories, such as ‘Unused’ or ‘Leftovers,’ and it also groups applications by vendor, store, and more.

CleanMyMac spots apps developed in Russia and Belarus as suspicious in the first place.

The legislation of these states allows governments and affiliated companies to access private information stored on servers in Russia without user consent or a court decision. As a consequence, apps made or hosted in Russia and Belarus may spy on users, steal their data, or even harm their computers.

There is currently a looming, global concern over Russian state-backed hacks and disinformation campaigns following Russia’s invasion of Ukraine. U.S. President Biden recently issued a statement pushing for improved cybersecurity in the face of an increasing threat of cyberattacks originating from Russia.

CleanMyMac X became available to download from Apple’s Mac App Store in May 2020. MacPaw added native support for Apple Silicon in February of last year, and the app went on to win a Red Dot Award in August.

CleanMyMac does its best to avoid bringing safe apps to the suspicious list, the team behind the app told iPhone in Canada in an email. “Before making a decision, we use information from different sources, ask security experts, and contact the app developer whenever possible and reasonable.”