New f.lux for OS X Beta: The Must-Have App for Your Mac at Night

If you haven’t already download f.lux for your Mac (free), you’re missing out. The app automatically changes the colour temperature of your Mac’s display so when you’re working at night it will help you relax before bedtime:

With the new f.lux, your screen warms up to make things look better at sunset. But then later, around the time you would start feeling sleepy, we do a little more, helping you get to bed on time. We’ve even tried to time this second phase with your body’s natural release of melatonin. You may find you want a more moderate effect at sunset now, because the bedtime setting can be more intense.

It’s really easy to set up, and it looks pretty good too.

F.lux will automatically enable itself and you can customize when you want the app to launch. Your location data will also help f.lux determine the sunrise and sunset to better adjust to your schedule. 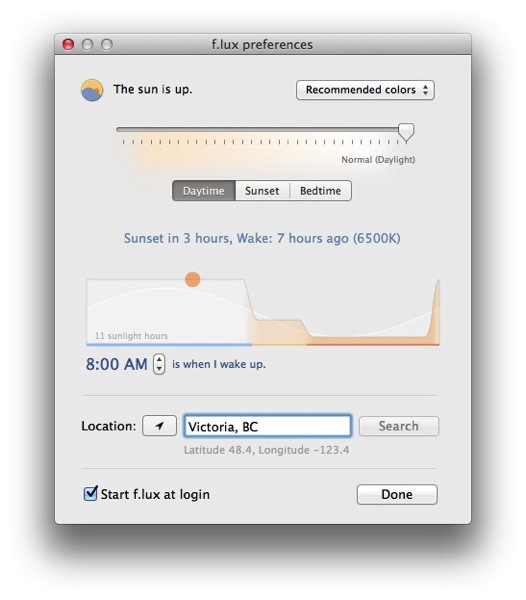 Below are some additional new features in this beta as well:

F.lux for Mac is a must-have in my opinion if you do last minute work at night before bed and don’t want to have that feeling of being ‘jacked up’ due to your screen’s colour temperature.

Click here to download the new f.lux for OS X beta and let me know what you think of it.