In line with earlier reports, Apple announced today updated MacBook Air models with faster processors. What the rumour mill didn’t mention, though, is that the updated models cost $100 less (in the US), meaning if you want to purchase a new MacBook Air, you can have one at USD $899. 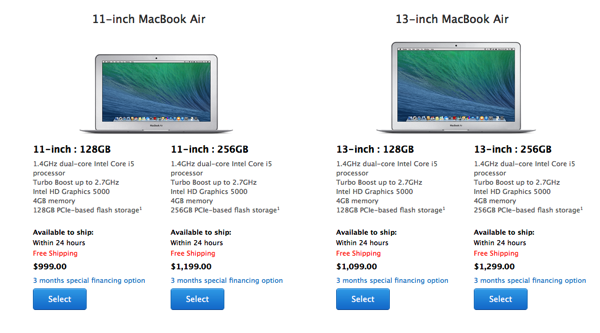 “With MacBook Air starting at $999, there’s no reason to settle for anything less than a Mac,” said Philip Schiller, Apple’s senior vice president of Worldwide Marketing. “Macs have never been more popular, and today we’ve boosted the performance of MacBook Air so even more people can experience the perfect everyday notebook.”

The new, standard models now are available with a faster 1.4GHz dual-core Intel Core i5 processor. The entry level 11-inch model is available for $999 while the entry level 13-inch model retails for $1,099. Configure-to-order options include a 1.7 GHz Intel Core i7 processor with Turbo Boost speeds up to 3.3 GHz, up to 8GB of memory and up to 512GB flash storage.

According to the tech specs, the new 11-inch MacBook Air models provide up to 9 hours of wireless web, and 9 hours of iTunes movies playback, while the 13-inch models stand out with up to 12-hours wireless web and the same half-day-long iTunes movie playback.

According to Bloomberg’s Mark Gurman, he believes Apple may not hold an October event to announce Mac and iPad Pro updates with M2 chips. The M2 chips were unveiled at WWDC this summer. Does Apple have enough new features still hiding to justify holding an October event with the media? “It seems unlikely,” says Gurman. […]
Gary Ng
2 weeks ago