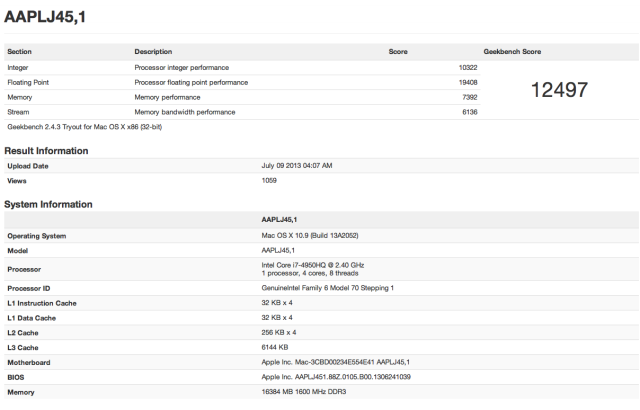 MacRumors points to a new Geekbench result posted earlier today that apparently reveals the next-generation 15-inch MacBook Pro, which, unfortunately for some users, didn’t make it to the WWDC 2013. The result appeared just a month after the 13-inch MacBook Pro benchmark results appeared on the same database of the popular Geekbench 2 benchmarking tool.

While it isn’t clear whether the result belongs to a Retina or non-Retina 15-inch MacBook Pro, it carries a code name of AAPLJ45,1.

As you can see from the above image, Apple’s next-generation 15-inch portable computer carries one of Intel’s new Haswell processors and 16 GB of RAM, and according to the result — 12497 — it is roughly in line with the currently available MBP. This, however, doesn’t mean you should skip this version: like in the case of the new MBA models, the Haswell chip’s benefit is in its efficiency. Furthermore, you may also welcome an all-day-battery-life, as with the MacBook Air.

The tech specs also reveal that the processor powering the 15-inch MBP is an Intel Core i7-4950HQ, clocked at 2.40 GHz.

Apple’s currently available MacBook Pro line — by the way, it’s $200 off with the Back to School Promo — comes with seven hours of battery life. We can only hope that the company will work to increase the battery life of these models to get closer to that of the new MacBook Air.