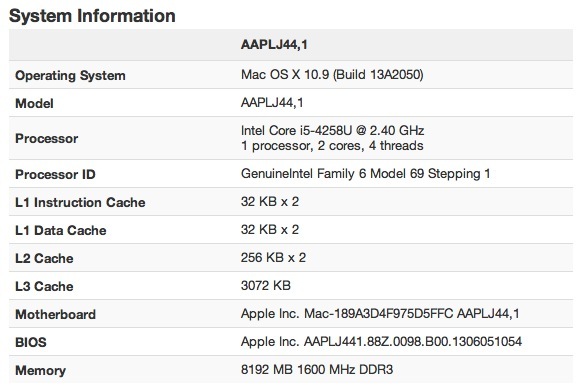 Although the expected updating of the MacBook Pro line seems delayed for unknown reasons (maybe the OS X Mavericks launch?), MacRumors spotted benchmarks of the upcoming portable on the Geekbench results database posted several days ago.

The new MacBook Pro, which apparently corresponds to a 13-inch MacBook Pro, was spotted under the ‘AAPLJ44.1″ code name. It runs a dual-core Intel Core i5-4258U processor clocked at 2.4GHz, with 8GB of RAM and a Boot ROM dated June 5. It also runs a special build of Apple’s upcoming desktop operating system OS X Mavericks. 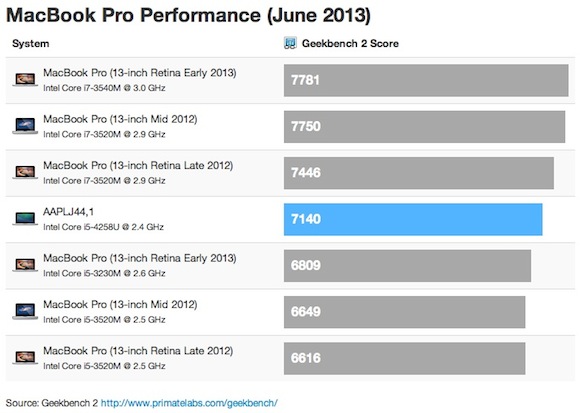 As John Poole of Primate Labs’ graphic bench points out, the new MacBook Pro brings modest improvements in terms of performance compared to the previous low-end models while running at a lower clock speed.

The Geekbench database goes beyond Apple’s sneak peek of its upcoming Mac Pro. It shares the benchmark score of machinery that is only expected to launch later this year. The benchmarked Mac Pro was spotted under the code name of “AAPLJ90.1” running a special build of Mavericks. The tech specs are impressive: a single 12-core processor from the upcoming Ivy Bridge-E family, the Xeon E5-2697 v2 running at 2.7 GHz. It is also equipped with 64 GB of RAM. 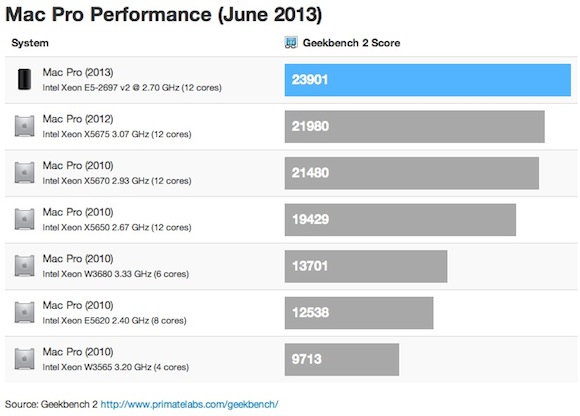 It’s too early to say that the new Mac Pro is a disappointment. Even if performance doesn’t improve, Apple’s managed to get better performance out of a system that’s an eighth the size of the current system.

The machinery is still months away. And as John Poole says, Apple still has to iron out both hardware and software issues before anything reaches the market.