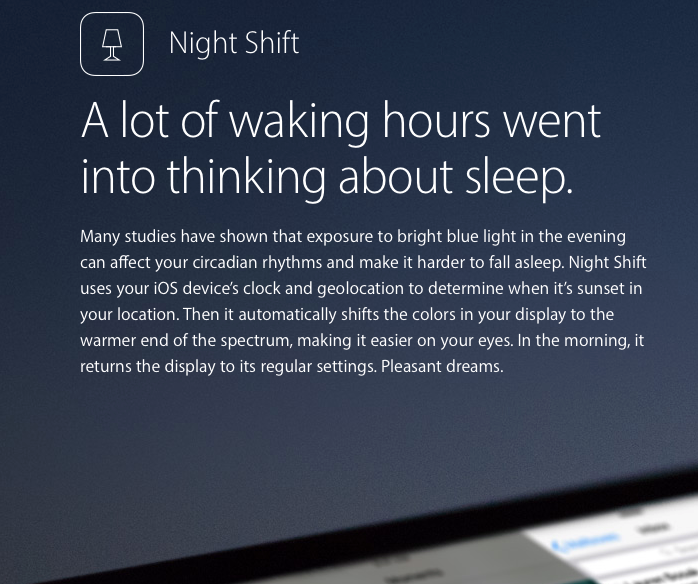 New within macOS 10.12.4 beta is Night Shift, which first debuted on iOS 9.3. The feature changes your monitor colour to warmer tones, in efforts to help you sleep at night. Here’s how Apple described the feature for iOS a year ago:

Many studies have shown that exposure to bright blue light in the evening can affect your circadian rhythms and make it harder to fall asleep. Night Shift uses your iOS device’s clock and geolocation to determine when it’s sunset in your location. Then it automatically shifts the colors in your display to the warmer end of the spectrum, making it easier on your eyes. In the morning, it returns the display to its regular settings. Pleasant dreams.

The introduction of Night Shift for macOS could mean the final nail in the coffin for F.lux, an app that has offered the same functionality for a while now, for both iOS (until Apple made them pull it) and Mac.

Below is a video from French Apple site MacGeneration demonstrating Night Shift in macOS Sierra 10.12.4 beta. Users will have settings to enable the feature via System Preferences > Displays:

I for one look forward to a system implementation of Night Shift. F.lux for Mac is good, but I think this will be better.