Apple retail chief Angela Ahrendts believes that the Cupertino company has a responsibility to distinguish itself from other tech companies through a philosophy of “enriching lives.” 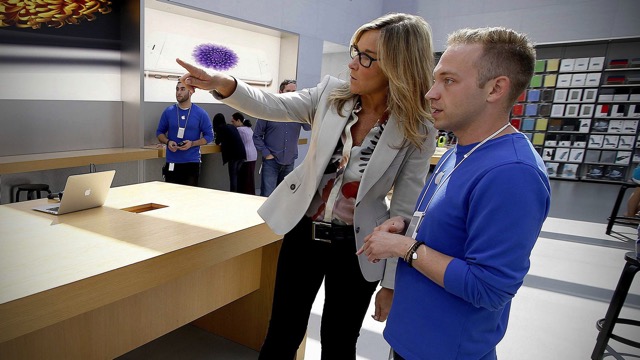 According to a recent interview at the Cannes Lions Festival in France on Wednesday by Tor Myhren, Apple’s vice president marketing communications, Ahrendts believes that Apple’s purity of vision for retail and its commitment to carving out a role in the local community are characteristics that really resonate with customers.

“Apple is in a leadership position when it comes to environmental responsibility and we’ve said in retail that we have a human responsibility,” she explained. “I often tease and I say, sometimes they think I’m nuts, but I think it’s important that the largest tech company in the world makes the largest investment in humans in the world.”

According to Ahrendts’ interview, the late Apple founder Steve Jobs instructed his first retail employees simply to enrich people’s lives, which is why staff are hired for empathy and not to sell. They have no sales quotas and, unusually for retail, do not receive a commission. Ahrendts is clear that she never regards the retail teams as a cost.

Some really interesting insight on the future of retail from Apple’s @AngelaAhrendts!

For more expert insights and sign up for a #CannesLions Digital Pass, available here https://t.co/VB1kN9uzpt pic.twitter.com/AsBKbSURe2

“They’re our ambassadors, they’re our greatest differentiator. This is something that Apple has that Amazon and Alibaba and nobody else has – people on the front line. And remember they’re hired to this day to enrich lives,” she explained. “I’ve told them that my job is to enrich their lives as much as they do the customers they serve and so I want to unlock their creative thinking.”

Ahrendts also revealed how Apple CEO Tim Cook convinced her to join Apple in 2013 — even though this meant turning her back on her previous job at Burberry.

“It was funny,” she told the audience. “I fought joining Apple because I thought I had the greatest job on the planet and we were flying, and life was incredible, but it was the culture that we had built and the values of the team at Burberry that was so brilliant. [But] Tim kept saying ‘trust me, trust me.'”

Ultimately, Ahrendts said that she found in Apple an analog for her own thoughts on how businesses should run. “You guys have been to Apple stores, you feel that energy and the values at Apple of the store teams and the loyalty and the tenure,” she continued. “The company’s values are aligned with my values and when you have that, [you think] ‘let’s go.'”