Earlier this month, shipping times for Apple’s AirPods improved, moving from six weeks down to four weeks. Now, we’re seeing another decrease, as shipping times are noted as 2-3 weeks on Apple.ca. 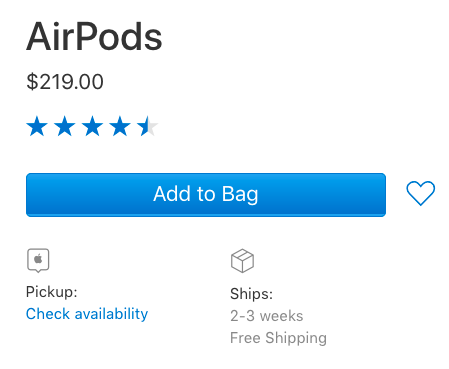 As we head into Apple’s expected upcoming iPhone announcements next month, you can bet these shipping times will drop down even further, considering successors of the iPhone 7, iPhone 7 Plus, and ‘iPhone 8’ will again lack headphone jacks. Apple will need a lot of these available for new users moving to wireless headphones (unless they are included in the box…).

Click here to find out how to track AirPods stock in real-time at Apple Stores. You can always try your luck at Best Buy, The Source and other authorized Apple retailers as well.

Still on the fence about AirPods? Read our review here.

Apple has recently ramped up efforts to diversify its supply chain and production capacity beyond China in the wake of geopolitical tensions between Washington and Beijing, COVID-19 slowdowns at Chinese factories, and more. However, undoing its reliance on China is going to be a long and hard road for the Cupertino, California-based company. According to...
Nehal Malik
34 mins ago