It’s Apparently Possible to Drill a Small Hole in AirTags

Wish you could attach your new AirTag to your keychain directly? Grab a drill. 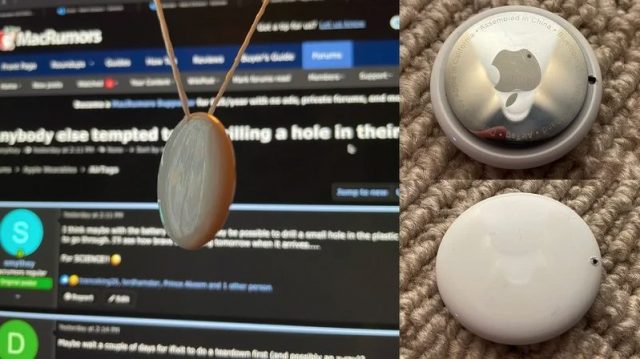 Apple’s AirTags are now available to buy and anyone who placed a pre-order in time will likely receive their new item tracker in the coming days. That means there are tons of people now playing with the little tracking puck and it also means we’re learning more about it, too.

Like the fact you can drill a hole through one.

Many people have complained about the fact that Apple tracking device doesn’t have a built-in hole to connect to a keychain, forcing users to purchase an additional accessory to attach the device to an item.

So, intrepid MacRumors forum member smythey took it upon themself to try a little experiment: He drilled a hole in the side of the AirTag to make an impromptu location to attach a keychain.

According to the poster, the small hole, drilled with a tiny drill bit and made near the edge of the device, doesn’t affect the functionality of the AirTag.

So in case you wanted to drill a hole in your AirTag, know that you can do that with the correct equipment.

But before you start arming your tools and DIY drilling machine to make a keychain hole in your AirTag, do keep in mind that doing so would invalidate the warranty. But then, you already knew that.