Amazon announced this morning it now supports Arabic language books on Kindle, allowing customers worldwide to read its growing selection of over 12,000 Arabic titles, with Arabic purchases possible in Canada, the USA, the UK and Germany. 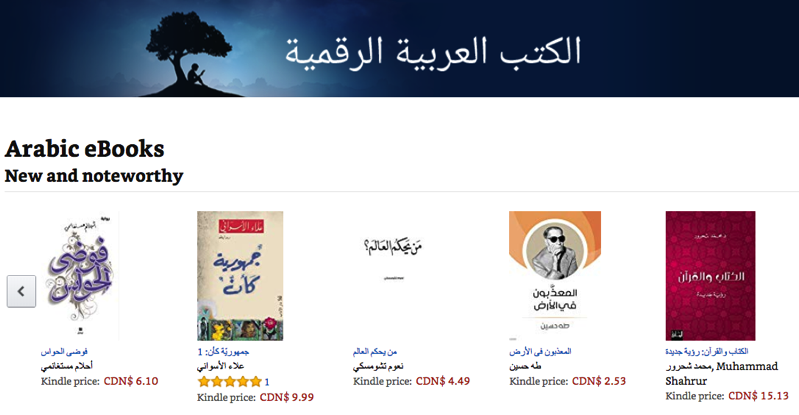 “We are excited to make Arabic language Kindle books available to the hundreds of millions of Arabic speakers around the world,” said David Naggar, Vice President of Kindle, in an emailed statement to iPhone in Canada. “This is another step in our ongoing work to provide more choice and selection to readers.”

Arabic language reading also supports other Kindle features readers have been using for a while now, such as the built-in dictionary, ability to adjust text size, margins, background colour, and more.

“We are thrilled to offer our leading Arabic language book selection to Kindle customers around the world,” said Bassam Chebaro, CEO of Arab Scientific Publishers, in a statement. “We’ve already seen great interest from our finest authors, writers, and scholars, to publish their Arabic titles for Kindle.”

Ahlam Mosteghanemi, best-selling author, said “I am thrilled that Amazon has opened this service, breaking the distances between the Arabic book and its readers.”

Click here to check out Arabic ebooks on Amazon.ca.

Apple today announced the winner of its inaugural Apple Podcasts Award for Show of the Year. The honour went to Slate Magazine's critically acclaimed narrative history series, Slow Burn, for its latest season, which covers Roe v. Wade. Published throughout June 2022, the four-episode season explores the events leading up to the landmark 1973 Supreme Court...
Nehal Malik
11 mins ago