Amazon announced a handful of new Echo products at a media event in Seattle yesterday, including the long-rumoured AirPods competitor dubbed ‘Echo Buds‘, the company’s first truly wireless earbuds which are now available for pre-order for $129.99 (US only) for shipping later this year. 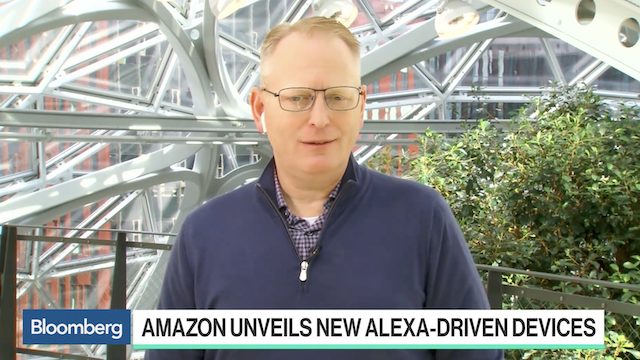 Interestingly, Amazon senior vice president of devices and service Dave Limp, who went on Bloomberg to talk about his company’s newly launched products, was actually wearing Apple’s AirPods (via 9to5Mac).

First spotted and shared on Twitter by John Paczkowski, Limp can clearly be seen wearing a single AirPod. You can watch it on video at this link as well.

You would think that his handler would have tackled him before he got to the cameras https://t.co/FoYdQnc8Xp

According to Amazon, the Echo Buds offer “really great sound” with five hours of battery life, touch controls, and noise cancellation developed in partnership with Bose. Pre-orders for Echo Buds are expected to arrive by Wednesday, October 30th in the US. There’s no word whether these will make its way to Canada, but we’ll let you know if they do.

Update: The AirPods belonged to Bloomberg, and not Amazon’s executive, as confirmed by Carolina Milanesi, tech analyst for @creativestrat:

In fairness those were Bloomberg’s AirPods with the line into the program. I had to do the same after David Limp https://t.co/yRENR5Ncem