The Amazon.ca Rewards Mastercard was launched back in June 2019, and recently, the card from MBNA added support for Apple Pay.

According to iPhone in Canada reader Jesse Hollington, he noticed support for Apple Pay was adding sometime recently.

“So, it looks like somewhere along the way this card became eligible for Apple Pay,” explained Jesse.

After learning only the MBNA NHL Rewards Visa cards are excluded from Apple Pay, Jesse tried adding the Amazon.ca Rewards Mastercard to the Apple wallet and it worked. He did have to call MBNA to verify the Apple Pay addition, but after it was all said and done, “it works fine”, he said.

It’s possible MBNA likely added Apple Pay support during the past year due to COVID-19 and the need for contactless transactions in stores.

The Amazon.ca Rewards Mastercard has no annual fee, offers 2.5% back on Amazon.ca and Whole Foods Market stores, plus has 2.5% back on foreign currency transactions and also 1% back on other eligible purchases.

When did you first notice Apple Pay support for the Amazon Rewards Mastercard? 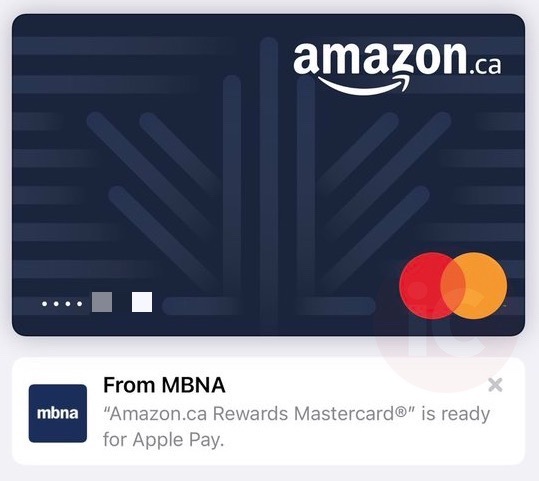 Apple analyst Ming-Chi Kuo has today claimed in a series of tweets that only the highest-end 'iPhone 16 series’ model will feature a periscope camera lens next year. Earlier this month, a report by The Elec noted that the new periscope camera lens expected to debut this year exclusively in the iPhone 15 Pro Max will...
Usman Qureshi
12 mins ago

Instagram co-founders Kevin Systrom and Mike Krieger are making a return with a brand new project called ‘Artifact,' a personalized news feed driven by artificial intelligence. As noted by the Platformer, the app uses machine learning to understand your interests and will soon let you discuss those articles with friends. The company plans to let users in...
Usman Qureshi
33 mins ago