As Apple’s quarterly earnings report approaches, analysts are lining up with their sales forecasts. The importance of iPhone sales is obvious, as they account for the biggest source of revenue for Apple. To put that into numbers, Philip Elmer-DeWitt highlights that iPhones accounted for 52.6% of total Apple revenues last year.

Each analyst has their own number, based on different reasons, with the lowest being 34.05 million, and the highest, 42.50 million for the past quarter. The average (pro) analyst prediction in the survey was 38.2 million.

Among the factors that affect iPhone sales, Bernstein’s analyst Toni Saccoraghi mentions slower-than-expected China Mobile sales, and tighter carrier upgrade policies in the US. On the positive side stands Katy Huberty of Morgan Stanley, who’s AlphaWise smartphone tracker suggests great iPhone sales of 40.6 million units (adjusted from 42 million units). This is well above the 38.2 million average estimate, but to back her claim Huberty points to Apple’s recent moves: the introduction of the 8 GB iPhone 5c and the recent promotions at carriers and retailers.

The 38.2 million average (estimate) means a roughly 2% rise on a year-over-year basis, but the real numbers will talk for themselves in less than a week. 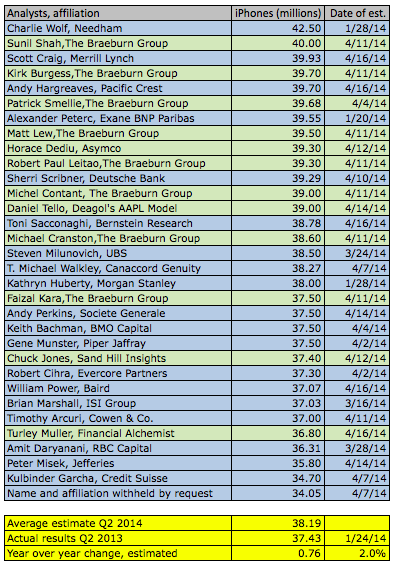