Apple’s decision to dual-source the A9 SoC in the iPhone 6s and 6s Plus has sparked a debate as to whether there is a difference between the two in terms of performance and power consumption. Reports have suggested there is, so Apple has made an atypical move and addressed consumer concerns with a statement (you can read it here). AnandTech has decided to analyze Apple’s statement.

Apple’s comment that battery life can be slightly affected due to component differences (they say 2-3%) is interesting, because the company has been one of the best companies in terms of accurately promoting the battery life of their products, as they collect massive amounts of data on which they base their claims.

After looking at the available data — Geekbench tests, battery life, chips and statistics — AnandTech concludes that there is not enough information currently available to accurately determine whether the TSMC or Samsung A9 chip has better power consumption, but more importantly on how large any difference might be. The fact is, even 1-on-1 comparison in a controlled environment will only offer you some insight into how the two chips compare, “but due to the natural variation in chip quality, it’s possible to end up testing two atypical phones and never know it.” 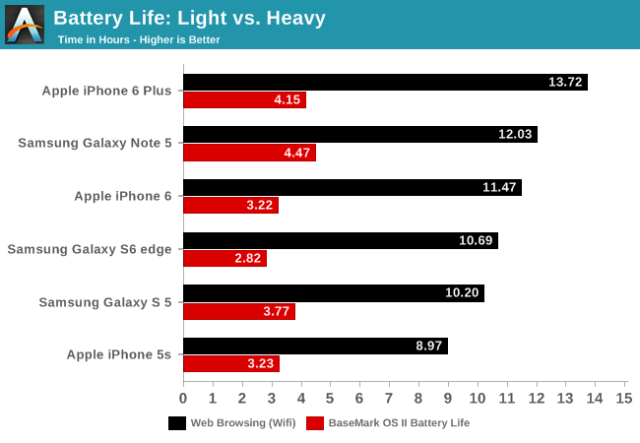 Due to the nature of its use of fixed size workloads, the GeekBench battery life benchmark lies somewhere in between a heavy load and a light load (Primate Labs states it’s around 30% on the 6s). And this is notable because if this is the case, it means that GeekBench is in fact highlighting the difference in power consumption between the TSMC and Samsung A9s. However as Apple points out in their statement, a sustained workload is not necessarily representative of what real world usage is like, with the real world having a burst of of different types of workloads. This doesn’t mean GeekBench doesn’t return valuable data, however it means we’re looking at a slice of a bigger picture. Ultimately if there is a difference between the TSMC and Samsung A9s, then it means that GeekBench is likely to be exacerbating the difference versus what a real world mixed use case test would see.

Finally, AnandTech concludes, that while Apple’s statement isn’t far off, dual chip outsourcing isn’t the greatest thing to do, even if the product delivered by the manufacturer meets Apple’s standards, as it can cause buyers to “hunt down phones with ‘golden’ AS9s and make buyers feel like “they’ve been swindled by not receiving an A9 with low power consumption.”

Overall, there will always be a slight variance in power consumption of the device and this is normal and expected.