While Google is already believed to be developing an Android Wear app for iOS in an attempt to bring support for all Android Wear smartwatches to iPhone, iPhone and iPod touch devices, Cydia developer Mohammad Abu-Garbeyyeh seems to have come up with an unofficial solution to allow answering of incoming iPhone calls from an Android Wear device (via iDownloadBlog). 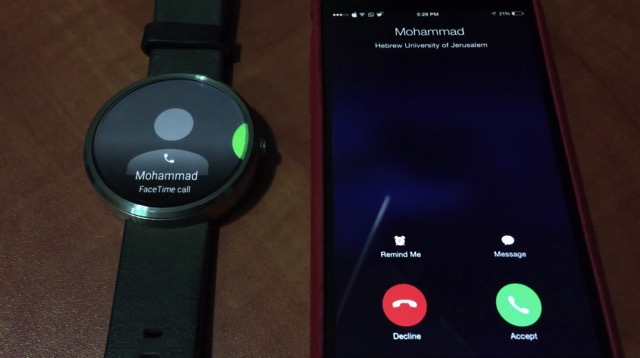 The developer of the tweak has previously shown a proof-of-concept video in which the stock iOS Messages app notification is sent directly to a Moto 360 Android Wear device. Now, he has put up a new video showing an Android Wear watch accepting an incoming call from an iPhone.

“The solution involves a little bit of software trickery. As shown in the clip included below, he had to simulate the gesture to answer the incoming iPhone call on Android Watch, no jailbreak required.

Answering iPhone calls with Android Wear was made possible using ANCS. Although an iPhone featured in the video is jailbroken, jailbreak is not required for the iPhone calling functionality on Android Wear. And due to the nature of the API used, this also means that iOS 8’s Actionable Notifications are supported as well”.