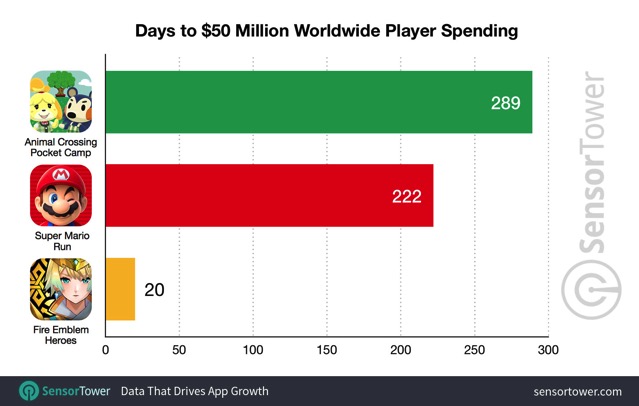 Since its debut back in November on the App Store and Google Play, Nintendo’s Animal Crossing: Pocket Camp has surpassed $50 million in player spending globally, according to the latest Sensor Tower Store Intelligence data.

In comparison to Nintendo’s previous mobile games, Pocket Camp took almost two months longer to reach the $50 million milestones than Super Mario Run. It must be kept in mind however that Super Mario was exclusively available on iOS for its first three months of release.

Animal Crossing: Pocket Camp revenue has largely come from players in Japan, who’ve contributed about 81 percent of the total it has earned to date. The United States is a distant second at about 14 percent. The majority of spending has been on iOS devices, at about 61 percent of revenue. It has been installed more than 25 million times so far.

Still, neither of the two games has been able to compete with Fire Emblem Heroes, which reached the same milestone only 20 days after its launch in February last year. To date, Fire Emblem Heroes has gone on to gross more than $400 million, taking in over $60 million this summer alone.