While the much awaited Pokémon Go has finally been released in Canada, some fans seem to be taking it a bit too far. Despite the fact that police have asked the public to be respectful of private property as they play the game around Metro Vancouver, there have been numerous reports of angry homeowners in the city telling Pokémon players to get off their lawns (via Global News). 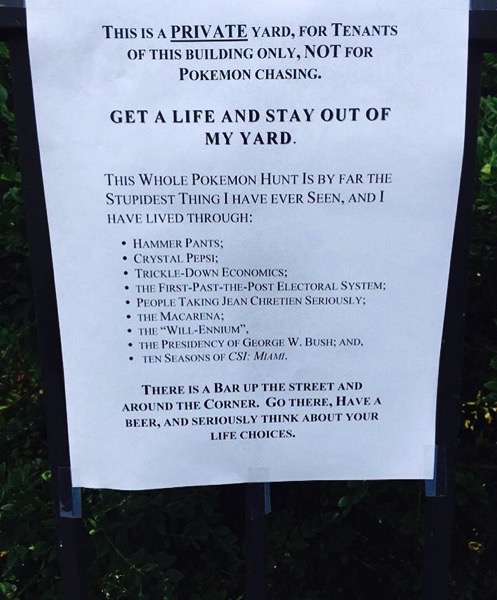 One such angry homeowner in Vancouver posted a notice outside his lawn titled “GET A LIFE AND STAY OUT OF MY YARD”. “This whole Pokémon hunt is by far the stupidest thing I have ever seen,” says the note, which was first tweeted by local radio station 102.7 The PEAK, and has since gone viral. The man then lists other things he has lived through, including Hammer Pants, Crystal Pepsi, “people taking Jean Chretien seriously,” and the entire 10-season duration of CSI: Miami.

“There is a bar up the street, and around the corner. Go there, have a beer, and seriously think about your life choices.”

The sign has since gone down – but it’s not the only example of conflict in Vancouver.

Check out the following video clip showing how things have gotten ugly in downtown Vancouver: