Global market research firm TrendForce has today released its rankings of leading notebook brands for 2Q18 in terms of notebook shipments during the period, according to which Apple has dropped to sixth place with a market share of only 6.5%. HP topped the rankings once again with 26.2% share of the global notebook market. 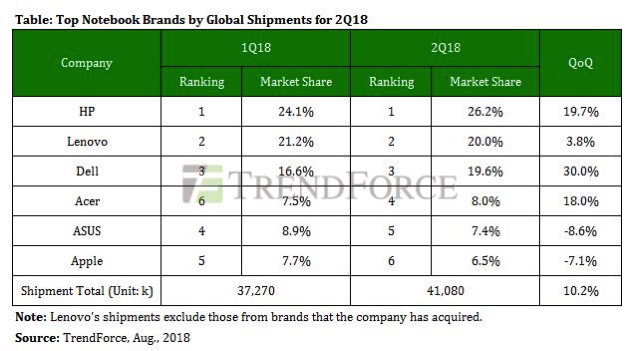 Lenovo maintained its second place as well, thanks to its solid performance in the year’s first half. While the brand’s shipments grew by 3.8%, large gains by US competitors caused its market share to drop from 21.2% in 1Q18 to 20% in 2Q18.

Apple retreated to sixth with its market share sliding to 6.5%. The second quarter was the transition period when Apple was preparing for the releases of the upcoming new MacBook devices for the year. TrendForce, therefore, expects MacBook shipments to again post a large QoQ increase in 3Q18, as Apple will be releasing a new MacBook Pro at the start of the quarter and a new MacBook Air at the end of the quarter.

Overall, TrendForce has revised the projection of this year’s total notebook shipments and now forecasts a YoY decline of 0.2%.