Here is something that is fueling more speculation about the rumoured self-driving Apple car: After browsing through Whois records updated on January 8, MacRumors has spotted that Apple has registered three auto-related domain names: apple.car, apple.cars, and apple.auto. 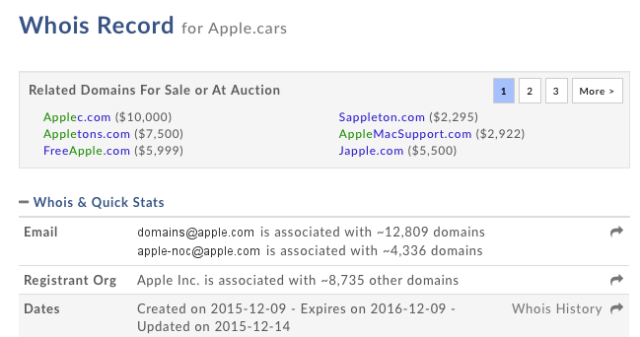 The registration was made through sponsoring registrar MarkMonitor Inc. back in December 2015.

Before jumping to early conclusions, we should consider that the domains may have something to do with CarPlay only. However, in the light of whispers about Apple’s plans to release an electric car by 2020, this move could represent a strong base for further speculation on the matter.

In addition, let’s not forget that Apple’s representatives have met with the California DMV to discuss self-driving vehicle regulations, and that the company has reportedly scouted secure locations in the Bay Area where the alleged electric car can be tested, as whispered by the Guardian’s sources back in August 2015.

On top of that, there are Apple’s recent hires from the automotive industry – Tesla, GM, and A123 Systems. The engineers recruited by Apple are allegedly working on the Apple Car project dubbed Project Titan.

The all-new Apple Watch Ultra officially went on sale last week, debuting the biggest change to Apple Watch yet, with the watch sporting features targeting extreme athletes. The Apple Watch Ultra has been designed to compete with the likes of Garmin, Suunto, Polar, and Coros, and boasts a suite of high-end features and improvements, including...
Usman Qureshi
43 mins ago