Today, the Department of Justice has filed its latest response (via The Verge) to Apple in their encryption battle over unlocking the iPhone 5c used in the San Bernardino case. In the filing, the Justice Department accuses Apple of deliberately increasing security to prevent itself from being able to comply with governmental requests.

“This burden, which is not unreasonable, is the direct result of Apple’s deliberate marketing decision to engineer its products so that the government cannot search them, even with a warrant.”

The FBI argues in the filing that its request is “narrow and targeted” and “invades no one’s privacy,” despite Apple continuously arguing the exact opposite. The government says that Apple has the capability to remove the technological barriers to access the data on the device in question “without undue burden.”

The government argues Farook’s phone may contain actionable intelligence that could help shed light on last year’s terror attack. Apple has maintained that a forced iCloud backup, obtained by connecting Farook’s iPhone to a known Wi-Fi network, might contain information FBI agents are looking for. However, that option was rendered moot after the FBI ordered San Bernardino officials to reset Farook’s Apple ID password.

The letter also takes issue with Apple’s assertions that the instant order violates its First and Fifth Amendment rights. Apple claims computer code should be covered by free speech protections, meaning DOJ requests to write code in an attempt to break into Farook’s iPhone amounts to forced speech.

“Apple’s claims are particularly weak because it does not involve a person being compelled to speak publicly, but a for-profit corporation being asked to modify commercial software that will be seen only by Apple.”

Apple’s lead attorney Bruce Sewell on Thursday delivered some harsh words regarding a DOJ court filing in response to the company’s refusal to cooperate in an FBI investigation, saying the government letter “reads like an indictment.” 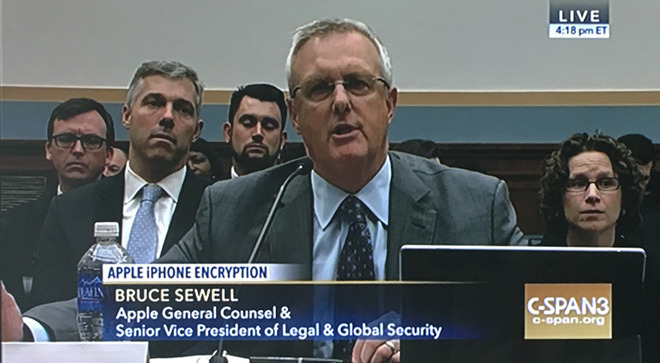 Sewell participated in a conference call with reporters just hours after federal prosecutors filed a formal response (as discussed above) in the ongoing San Bernardino encryption case, reports The Verge. In a statement, Sewell said:

“In 30 years of practice I don’t think I’ve seen a legal brief that was more intended to smear the other side with false accusations and innuendo, and less intended to focus on the real merits of the case.”

He went on to say that the DOJ brief “reads like an indictment” of Apple and its encryption policies. Sewell added:

“This should be deeply offensive to everyone that reads it. An unsupported, unsubstantiated effort to vilify Apple rather than confront the issues in the case. We add security features to protect our customers from hackers and criminals. And the FBI should be supporting us in this because it keeps everyone safe. To suggest otherwise is demeaning. It cheapens the debate and it tries to mask the real and serious issues. I can only conclude that the DoJ is so desperate at this point that it has thrown all decorum to the winds.”

Sewell ended the call with a plea, asking the opposing legal team to refrain from escalating tensions further. He said:

“Look, we know there are great people in the DoJ and the FBI. We work shoulder to shoulder with them all the time. That’s why this cheap shot brief surprises us so much. We help when we’re asked to. We’re honest about what we can and can’t do. Let’s at least treat one another with respect and get this case before the American people in a responsible way. We are going to court to exercise our legal rights. Everyone should beware, because it seems like disagreeing with the Department of Justice means you must be evil and anti-American. Nothing could be further from the truth.”

Apple and the DoJ are set to meet in court over the matter in a hearing scheduled for March 22.