Apple Celebrates ‘A Decade of iTunes’ with Interactive Milestone Feature 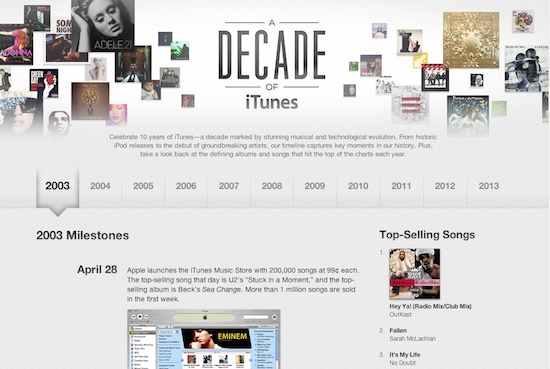 Apple will celebrate the 10th anniversary of the iTunes Store being online on Sunday, April 28. To honour this event, the company has posted a new iTunes Store feature “A Decade of iTunes”.

The timeline guides iTunes users through a number of key events of the past decade starting with the launch in 2003 when Apple’s iTunes Music Store kicked off with 200,000 songs at 99 cents. The top-selling song of that memorable April 28 was U2’s “Stuck in a Moment”. Apple sold more than a million songs that weekend.

Another highlighted event was the 2010 launch of The Beatles on iTunes and, more recently, the 1 billion courses and classes, 40 billion app downloads, and 25 million songs milestones were surpassed earlier this year.

iTunes Store business has grown rapidly, but Apple has said it aims to run the store “at break-even”, Horace Dediu highlights. To put that into numbers: iTunes has achieved amazing growth — 26 million songs available in 119 countries.

Apple is urging suppliers to make sure that all shipments from Taiwan to China follow Chinese customs regulations to avoid processing delays at the border — reports Nikkei Asia. As political tensions between China and Taiwan continue to rise, the former has started strictly enforcing a long-standing rule that requires Taiwan-made imports to be labelled...
Nehal Malik
4 hours ago

Amazon announced on Friday it has entered into a merger agreement to acquire robot vacuum maker, iRobot, in a $1.7 billion all-cash deal. “We know that saving time matters, and chores take precious time that can be better spent doing something that customers love,” said Dave Limp, SVP of Amazon Devices, in a statement. “Over...
Gary Ng
5 hours ago