Apple was served with a new class action lawsuit on Friday alleging that the iPhone maker failed to properly inform users about a new feature built into iOS 9 (the latest mobile operating system), reports AppleInsider. 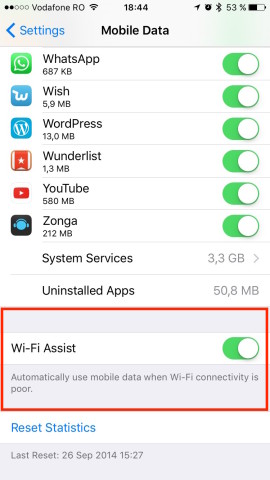 One of the much-talked-about features of iOS 9 was this controversial Wi-Fi assist – the subject of the lawsuit – which automatically connects your iPhone to a cellular network and uses mobile data when Wi-Fi connectivity is poor.

In the lawsuit filed in a US District Court in San Jose on Friday, plaintiffs William Scott Philips and Suzanne Schmidt Philips claim that because of costs related to the aforementioned feature, the “overall amount in controversy exceeds” $5 million.

Furthermore, they allege Apple failed to properly inform users about Wi-Fi Assist until the Internet was flooded with articles explaining it. Ultimately, Apple issued a fix, but it was too little, too late, the plaintiffs say and point to the incurred mobile data overuse charges on both their iPhone 5s devices following their upgrade to iOS 9.

As you may already know, Wi-Fi Assist can be turned off, so you’d better do that right now if you want to avoid high cellphone bills due to data overuse. For more information about Wi-Fi assist and our how-to article, follow this link.