Apple Could Sell up to 60 Million iWatches In 12 Months, Analyst Says

After taking into consideration Apple’s two most successful iDevice launches, Katy Huberty foresees two possible sale scenarios. Whichever turns out to be correct, one thing is certain; Apple is going to have a great year. 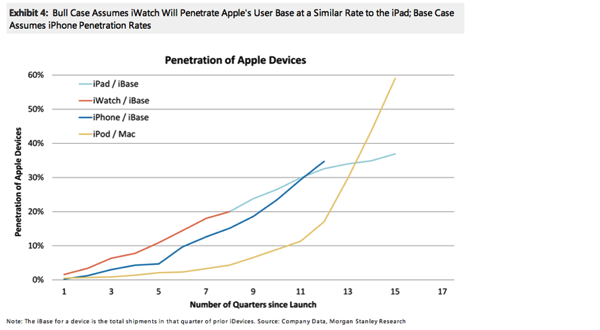 In the first scenario, Huberty considers the iPhone adoption trajectory: in this instance, Apple will sell about 30 million iWatch units-at $300 apiece. This will generate an additional $9 billion revenue for Apple and add $0.49 to Apple’s “bottom line”.

The second scenario takes into consideration the iPad adoption rate: if the iWatch follows this trajectory, Apple will sell 60 million units in the next 12 months; hitting$132 per share price by July 2015.

It is worth noting that in the last year analysts have become more and more confident in Apple’s iWatch sales. Last October, Piper Jaffray analyst Gene Munster said that Apple could sell 10 million iWatch units for $350 apiece. His assertions were based on a survey of nearly 800 US customers.

Katy Huberty has been positive about Apple’s iWatch sales. In February she said Apple could sell about to 58 million iWatch units, adding $17,5 billion in revenue, but as we can see, she adjusted her forecast to up to 60 million units.