Apple has started its push to get developers to get their apps ready for Apple Pay, launching a new page on its developer site dedicated to resources on how app makers can jump on the company’s new mobile payment platform, set to debut next month in the US-only.

There’s no word when Canada will get Apple Pay, but many are crossing their fingers it’ll happen soon when the platform expands.

Apple Pay gives users an easy, secure, and private way to pay for physical goods and services such as groceries, clothing, tickets, and reservations in your iOS 8 app, using payment information stored in their iOS device. By simply using Touch ID, users can quickly and securely provide all their payment and shipping information to check out with a single touch.

Also, an email was sent out this afternoon to developers to submit their iOS 8 apps, as the public release of the operating system is set to be released on September 17 (the golden master seed was released to developers today). 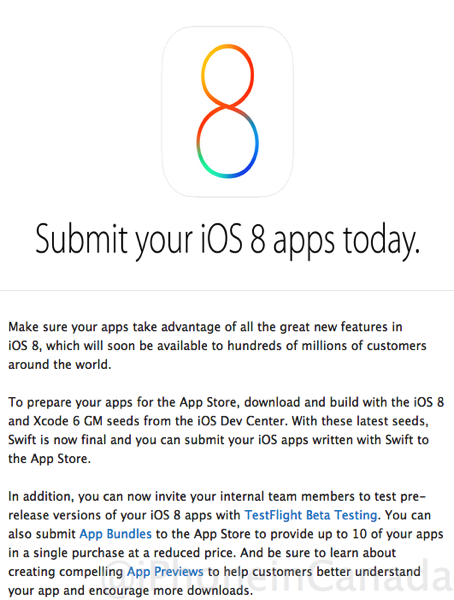