Apple Drops Price of HomePod in Canada to $399 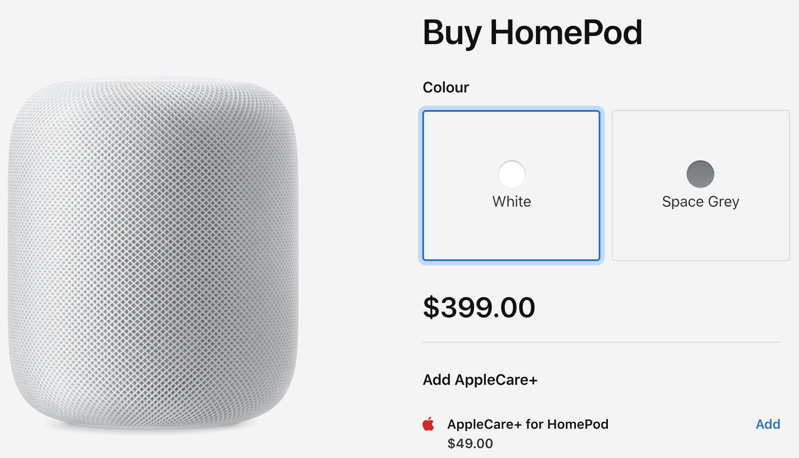 Apple has dropped the price of its HomePod in Canada, part of a worldwide price drop, now available at $399 CAD, a reduction of $50 CAD.

The HomePod smart speaker, powered by Siri, launched in Canada back in May of 2018, priced at $449. It launched without calendar support or French Canadian support. For the latter, that finally debuted last September, along with expanded features for HomePod.

Even at its new price of $399, HomePod is considered expensive versus alternatives like those from Sonos, especially since only Apple Music can be summoned with Siri on the speaker.

Are you going to buy a HomePod now that it is slightly cheaper in Canada?

According to a report by MacRumors, Apple has updated its battery replacement policy for the sixth-generation ‌iPad mini‌, allowing customers to get their batteries replaced without requiring a device replacement. Prior to the announcement, if a customer wanted to get their iPad mini 6 battery replaced, Apple Stores, authorized service providers, and repair centers will give those...
Usman Qureshi
16 mins ago

A new Apple support video has detailed how you can use the iPhone's Safety Check feature to disconnect your device from people, apps, and devices you no longer want to be connected to. You can use Safety Check to check whom you’re sharing information with, restrict Messages and FaceTime to your iPhone, reset system privacy...
Usman Qureshi
28 mins ago

Amid the tools used by archaeologists for centuries i.e. trowels, buckets, brushes, and pickaxes, there’s a new piece of equipment, the iPad Pro, as highlighted by Apple in a new feature. “iPad is the perfect archaeology machine,” says Tulane University professor Dr. Allison Emmerson. who was part of the team that pioneered its use to...
Usman Qureshi
54 mins ago