Ever wondered what happens to those old iPhones you send in via Apple’s recycling program? Well, Bloomberg’s reporters had the same question, and they have uncovered some interesting details of the iPhone’s “afterlife”. 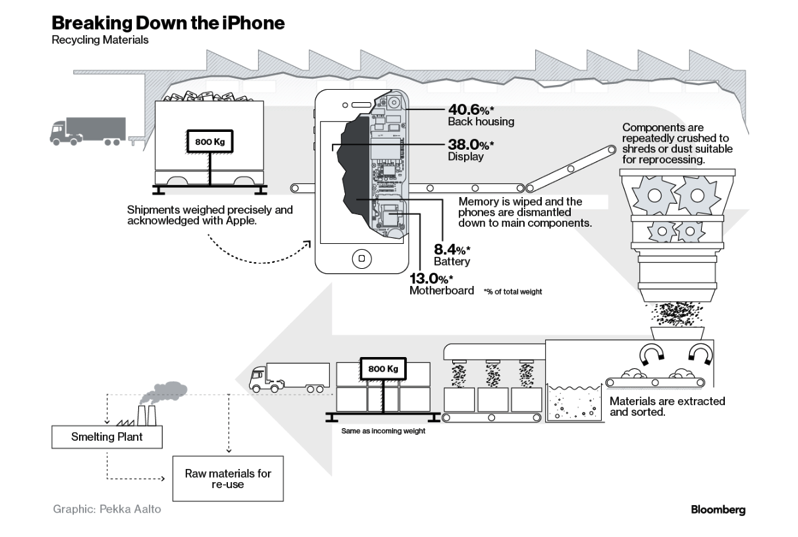 Turns out Apple’s restrictive policy doesn’t apply only to the manufacturing process, and the same goes for the de-manufacturing process. Also, Apple applies the same high standards in the disassembly process: While global brands such as “HP, Huawei, Amazon and Microsoft have detailed protocols for recycling their products, Apple’s are the most rigid and exacting, according to people involved in the processes, who declined to be identified because they’re not authorized to speak about clients,” the Bloomberg report reads.

Speaking with the news outlet, Apple head of environmental affairs Lisa Jackson expressed her belief that this is what customers expect from the company.

As detailed by the report, in the electronic recycling business the benchmark is to try to collect and recycle 70% (by weight) of the older devices. Apple goes beyond that by typically reaching 85%, according to Jackson.

That means grinding up iPhones has become a profitable business over the years, since Apple’s selected partners will have to destroy the equivalent of 9 million iPhone 3GS models this year.

So where do those iPhones go to die? Apple has selected Li Tong Group, which has facilities in various places, one of which is in an industrial park in Hong Kong’s Yuen Long district.

Apple says it collected more than 40,000 tons of e-waste in 2014 from recycled devices (this isn’t limited to iPhones, though). However, there is an “e-waste problem” in the world, as pointed out by Jackson. “If we really want to leave the world better than we found it, we have to invest in ways to go further than what happens now,” she added.