A few weeks back, Apple was granted a patent describing a process in which an iPhone’s sapphire display is joined with a bezel made out of LiquidMetal. Today, a new report by AppleInsider claiming that the Cupertino company continues to explore new manufacturing methods for the amorphous alloy, further adds fuel to speculations that Apple will soon roll out an iPhone made with substantial amounts of LiquidMetal. 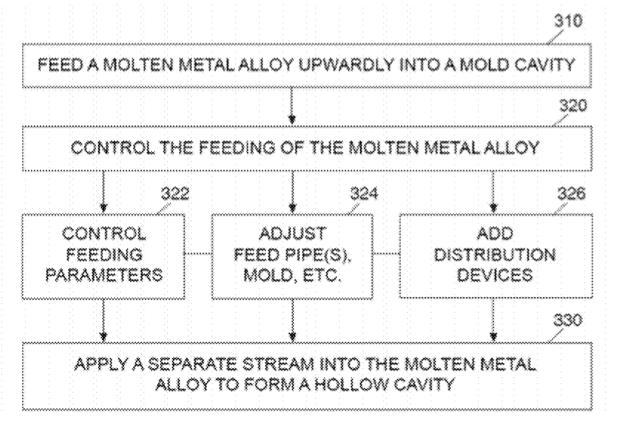 An Apple patent application discovered by the source titled “Counter-gravity casting of hollow shapes”, which was filed earlier this year, describes a manufacturing method that draws molten material into a mold using a vacuum, rather than being poured in. Apple notes that the method has a number of advantages over traditional poured casting, including increased yields and a simplified molding system.

According to Apple’s filing, one of the most difficult parts of manufacturing Liquidmetal components is controlling the cooling rate to avoid crystallization of the material. Using counter-gravity casting, the company says, allows for more precise control of temperature as well as charge amount, viscosity, injection rate, and injection pressure.

Apple has also contemplated ways of spinning the mold during the manufacturing process to control the shell thickness of hollow parts, as well as a “fountain” approach to evenly distribute the material. The parts formed by these methods could have “various hollow shapes, enclosures, tubes, preforms, and other similar items.”

It must be pointed out that Apple has also recently extended exclusive contract rights to use the amorphous metal alloy in consumer electronics through 2015.