Apple originally stated it would launch its iPhone 6 or later battery replacement program in January 2018, but the program launched earlier than expected.

Now, it appears Apple has decided to replace batteries in iPhones regardless of whether their device passed a Genius Bar or remote diagnostic test, as confirmed to MacRumors:

Apple has since independently confirmed to MacRumors that it will agree to replace an eligible battery for a $29 fee, regardless of whether an official diagnostic test shows that it is still able to retain less than 80 percent of its original capacity.

In Apple’s original letter published to customers on its website, it stated they would replace out-of-warranty batteries for $35 for those “whose battery needs to be replaced”, suggesting requirements would need to be met. Now, it appears Apple has decided to take the “L” and just replace all customer batteries, regardless of passing a diagnostic test or not.

The controversy for Apple started when users discovered iOS was slowing down some older iPhone models, in what was an effort by the company to prevent phones from unexpected shutdowns and slowdowns for devices with aging batteries. The problem? Apple did not tell users about the software ‘feature’, but only communicated what was going on after third parties confirmed the practice was indeed happening.

iPhone in Canada can independently confirm this new Apple Support policy is in effect.

Yesterday, we chatted with Apple Support (via the iOS app) regarding our older iPhone 6s Plus battery situation. The Apple Support specialist followed proper procedure but in the end, our battery passed the diagnostic test and we were told to go format our device in iTunes as new and contact them again, before we could even talk about a battery swap.

This morning, after initiating a chat with Apple Support (via the iOS app), and asking for a battery replacement, the agent did not put up any barriers and immediately proceeded to start the return process. They’ll ask if your phone has physical or water damage, ask you to disable Find my iPhone, and also to verify your IMEI number.

Mail in shipping charges will cost $10.77 and after taxes in BC, the total cost comes to $51.26 CAD for an out of warranty battery replacement ($35 CAD). Apple will send me a box, which I will then mail my iPhone 6s Plus away for the battery swap. 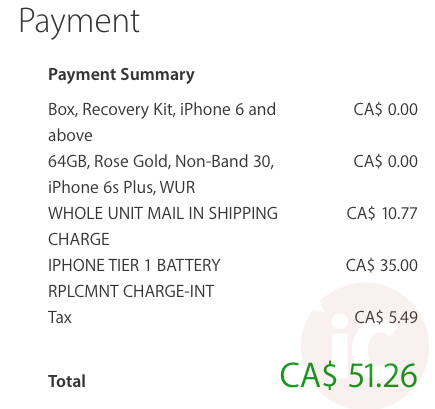 So there you have it. If you have an iPhone 6 or later (includes iPhone SE), and you’re dealing with battery issues, contact Apple and get your $35 out-of-warranty battery replacement.

Let us know if you’re going to go through this battery replacement process in the comments!

The Samsung Galaxy S23 series may be launching in early February. Leaks suggest that, unlike last year, Samsung's new lineup of flagship smartphones could make their debut during the traditional window of time. According to a report from Korean news outlet Korea JoongAng Daily (via The Verge), the latest entry in the Samsung Galaxy line...
Steve Vegvari
44 mins ago