Apple is Now Worth More Than The Entire Russian Stock Market

According to a report from Bloomberg, Apple is now worth more than the entire Russian stock market. Russia holds the 20th largest major market in the world and was surpassed by the iPhone manufacturer yesterday.

“If you owned Apple Inc. (AAPL), and sold it, you could purchase the entire stock market of Russia, and still have enough change to buy every Russian an iPhone 6 Plus.”

Not only could Apple buy the entire Russian stock market, but it would also have enough money left over to give a 16GB iPhone 6 Plus to every person living in Russia. The Cupertino-based company is now also bigger than Singapore and Italy.

“Russia, the 20th largest among the world’s major markets, is not the only one Apple has surpassed. The company, which forecasts a record holiday-sales quarter and has $155 billion in cash, is also bigger than 17th-ranked Singapore and 18th-ranked Italy.” 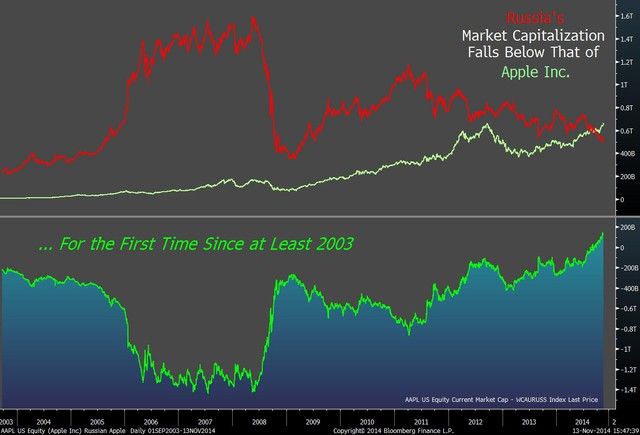 According to the data compiled by Bloomberg, Apple has gained $147 billion this year while the value of Russian equities have fallen by about $234 billion to $531 billion. Vadim Bit-Avragim, a portfolio manager in Moscow, said:

“Apple works with shareholders to maximize returns and is based where property is protected by law. In Russia, the legislative protection for property is not as good, most state-run companies have poor corporate governance, resources are concentrated in state hands and borrowing costs are shooting up. After all this, when you get involved in conflicts with your neighbors, it becomes very hard to persuade investors from all over the world to invest here.”

Apple shares have been rising steadily over the past week, allowing them to break their previous market cap all-time high of $658 billion which was set in September 2012.