Apple is the World’s Fastest Growing Brand, Just Behind Coca-Cola

Interbrand has released their annual report on best global brands and Apple has become the fastest growing brand with growth of 129% compared to a year ago. The company sits in second place just behind number one, Coca-Cola. Here’s the Interbrand report on Apple:

Apple (+129%): Despite Steve Jobs’ passing, consumers’ emotional connection to the Apple brand remains stronger than ever – this was made clear just recently with the launch of iPhone 5. Even in the face of increasing competition from rivals Google and Samsung, the company continues to demonstrate its commitment to protecting the Apple brand and its intellectual property. Such commitment enabled Apple to post quarterly revenue of USD $35 billion and quarterly net profit of $8.8 billion in July.

Other fast risers in the list include Amazon (+46%) and Samsung (+40%). Facebook made the list for the first time as 69th on the list. As for Canada’s tech darling Research in Motion? Their BlackBerry brand plummeted 39% to the 93rd spot; only a year ago they were 56th on the list.

In an interview with the CBC:

“If BlackBerry can deliver a truly innovative experience designed for today’s mobile professional, it will send the message that the brand is committed to the (business to business) market on which it had originally built its success.”

Earlier this year, Interbrand released their report on the best Canadian brands, which included our ‘Big 3’ carriers Rogers, Telus and Bell. BlackBerry was ranked 4th in that report, but will most likely continue to spiral down the rankings unless it can compete with Apple and Google when BlackBerry 10 is released in 2013. 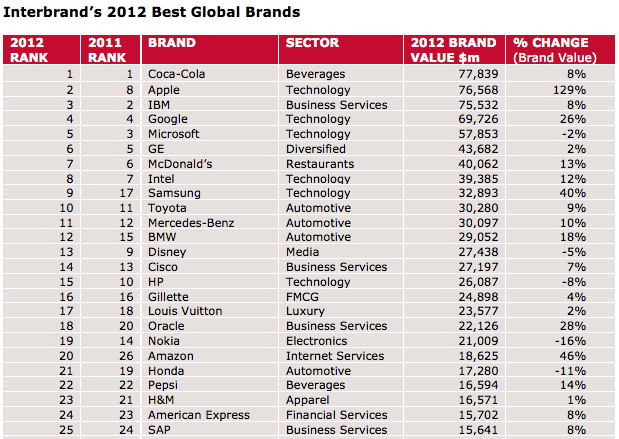 What’s your favourite brand (aside from Apple of course)?