Apple is the most valuable brand in the world, as it is worth nearly $117 billion, according to the Telegraph. The iPhone maker is followed closely by Google, with its worth estimated at $107 billion, the pair being the only two of the world’s most valuable companies whose values run to nine figures.

Apple’s partner IBM ranked third with $76 billion, while Microsoft and Coca-Cola complete the top five of the world’s most valuable brands, with their worth estimated at $72 billion and $65 billion, respectively.

The rankings were put into the chart you can see below by the Telegraph, based on data provided by three different media agencies: market research company Millward Brown, consultancy Brand Finance, and Interbrand.

The three companies conduct surveys on the value of global brands each year. The list compiled by the Telegraph includes only those companies appearing in all three surveys.
For example, the surveys don’t include companies such as AT&T, Verizon, Wells Fargo, Vodafone or BMW. 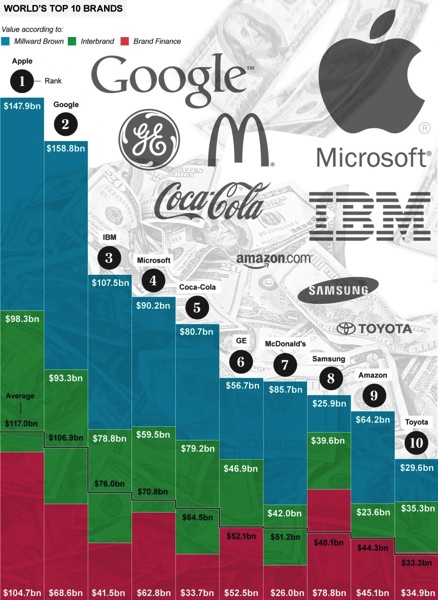