A month after launch, Apple Music has 11 million (trial) subscribers, Eddy Cue said last week in an exclusive interview with USA Today. Both Eddy Cue and Jimmy Iovine were glad to share that number, but how does it compare to the competition and to Apple’s iPhone install base? 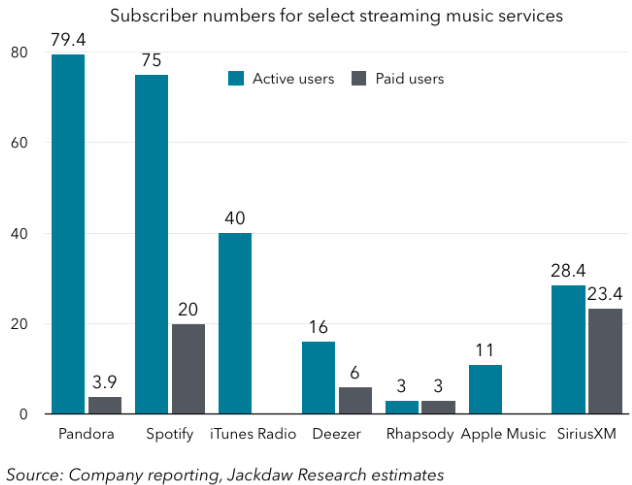 Now, if we compare this to the iTunes Radio launch, this number begins to lose its sparkle: “11 million happens to be the exact number of iTunes Radio users Apple announced a single week after iOS 7 . . . launched,” Dawson notes.

Now, if we add that Apple’s iPhone install base currently stands at around half a billion, the 11 million yet again looks tiny. Only 2% of the total install base.

Dawson has several explanations: slow iOS 8.4 adoption rate, lack of awareness or interest, etc. However, speaking with The Evening Standard, Jimmy Iovine pointed out a major obstacle Apple needs to overcome: the issue of winning Millenials, who never pay for music.

Apple Music will be available for free until the end of September. From that moment on, if you want to get access to Apple’s 30-million-song library, you will need to pay at least $9.99 for an individual membership. It will certainly be interesting to see how many trial users convert to paying members.

But you know what? Apple’s biggest rival, Spotify, is helping the company as it prepares to suspend the free tier, according to a report from Digital Music (via Engadget). As it turns out, Spotify’s licencing deals with the three major labels (Sony, Universal, and Warner Bros.) are up for renewal, and if it wants to continue to offer its catalog of 30 million songs, it will need to answer the label’s demand, and that is subscriber-only content.

With this in mind, we will likely see some major changes in the music streaming landscape as players move toward subscription-only tiers, and that could favour Apple.

Streaming service FuboTV announced on Wednesday it has launched three Disney channels within its Premium package. Available now are the Disney Channel, Disney Junior and Disney XD. According to FuboTV, these new Disney channels are part of the company’s partnership with STACKTV, which began last year and added Global, HGTV Canada, Food Network Canada, W Network, […]
Gary Ng
41 mins ago