Apple Online Store Down Ahead of “Hey Siri” Event 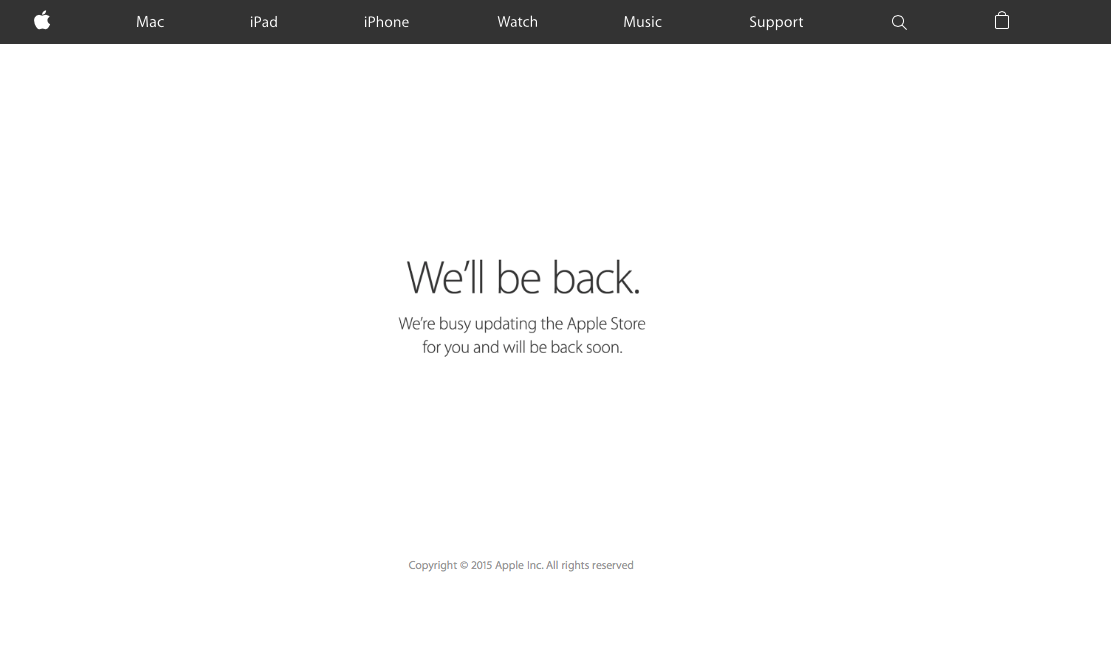 While Apple’s official website is up, you cannot buy anything from the online store, as it is now down, as usual, for updates.

The “Hey Siri” event kicks off in just a few hours at 10:00 a.m. PST, and the store will go back online after the event ends, with information about the products Apple will have just announced. As for what we are going to see today during the presentation, you can read our roundup (here) or the latest whispers (here).

One notable thing: During the past few years Apple has held two media events in the fall, introducing new iPhones in September and iPads in October. Interestingly, this year will be different, as noted by John Gruber: Apparently, Apple plans only one event for this fall, and that will be today, at least according to the “little birdies” from San Francisco.

If that information is correct, Apple will likely introduce the much-rumoured iPad Pro, as revealed by 9to5Mac, alongside the new iPads. By the way, Apple has been hinting at a major App Store announcement through its official App Store Twitter account.

Tim Cook tweeted earlier this morning: “Just a few hours to go here in SF! We can’t wait to show you what we’ve been working on.”

Just a few hours to go here in SF! We can’t wait to show you what we’ve been working on. http://t.co/DeBsAD67p5 pic.twitter.com/DLIPTK2m1L

You can live stream the media event on your iPhone (iOS 7 or later) or Mac using Safari (6.0.5 or later), or on a PC with Microsoft Edge on Windows 10, and recently the Apple TV’s Events channel was refreshed with a new icon matching the event teaser.