What to Expect from Apple’s ‘Hey Siri’ Event [Roundup]

In less than two days, all eyes will be on Apple as it kicks off its highly anticipated media event. While we can expect a new iPhone, the rumour mill has also been suggesting we will get a big update for the Apple TV and possibly the long-rumoured iPad Pro alongside software announcements such as iOS 9 and WatchOS 2. 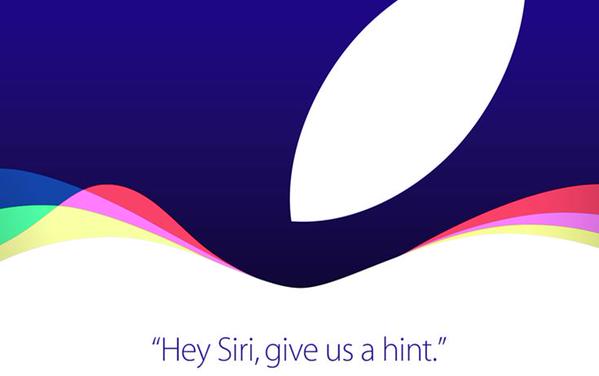 Just in case you were expecting a totally revamped iPhone, don’t. The iPhone 6s and iPhone 6s Plus will look almost exactly like the iPhone 6 (and its bigger bother), but they will feature nice improvements such as a better 12 MP rear camera capable of 4K video recording, a 5 MP front-facing camera, Force Touch, possibly 2 GB of RAM, a more powerful A9 chip, and a new colour to match the Apple Watch colour line: pink, or as some call it, rose gold (despite having no traces of gold in it).

Compared to Apple’s yearly iPhone upgrade cycle, it feels like ages since the company has released a new-generation set-top box. The “hobby” device is due for an important update as Apple prepares to take over your living room. In terms of technical specs, the Apple TV will incorporate a better processor (A8?) and more storage, but more importantly, Apple will finally open the device to third-party developers as it targets casual gamers. As such, it has allegedly added an array of sensors and a new remote with touchpad capabilities, plus an integrated universal search feature powered by Siri.

The fact is, we don’t know much about the 12.9-inch iPad Pro. What we do know is that Apple is aiming to conquer the enterprise market, and we’ve seen a few strategical partnerships recently that aim to boost its presence there. While the iPad and iPhone are widely used in the enterprise market as productivity tools, the iPad Pro could be the device that fills a gap (we aren’t aware of it yet, but hey, Apple may know something we don’t). The rumour has it that Apple is planning to present a stylus as well, which could ease the work of designers and other enterprise customers on the huge 12.9-inch canvas the device will allegedly provide.

9to5Mac has further details about the iPad Pro:

We’ve also learned that the base model of iPad Pro will likely ship with 64GB of storage, which is substantially more space than the 16GB base models of the iPad Air and iPad mini lines. Apple will also sell a pricer 128GB model. […] As the iPad Pro will support a new Apple-designed Bluetooth keyboard, customers may have a tough choice in the $1,000+ price range when looking for either a large-sized iPad or small-sized MacBook.[…] This is unlike the split-screen mode on the iPad Air 2 and upcoming iPad mini 4 that condenses portrait iPad apps to fit side-by-size in landscape mode. The iPad Pro will include an A9X chip, which we’ve heard will be a “large” leap over the Air 2’s A8X.

There have been whispers about a possible iPad refresh announcement — although Apple historically announces iPads in October, this year, the company seems to be “breaking” its product release pattern, announcing the iPad mini 4 ahead of “its time.”

We already saw a few highlights of Apple’s forthcoming mobile operating systems several months ago. Apple will likely emphasize the key features of iOS 9 and WatchOS 2 on Wednesday. Both are due this fall, possibly on September 18.

The New York Times has learned that, as part of the announcement, Apple will also announce new Apple Watch bands and an iPad keyboard (this could make sense in light of an iPad Pro announcement).

The “Hey Siri, Give Us a Hint” event will be live-streamed, and for the first time, Windows users will also be able to watch it live. Stay tuned. We’ll keep you posted.